Freeman Field was activated on Dec. 1, 1942, and was used to train American pilots to fly twin engine planes. The Freeman Field Army Airfield Museum is located on the grounds of Freeman Field, in a bunker used during the Field’s heyday.

The museum features graduation announcements, dance invitation, uniforms, airplane models, photos and maps of the area. There is an array of plane parts that were buried on the base, including the tail section from a German fighter plane, which still has the Nazi emblem. 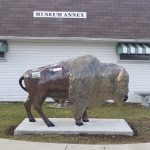