Jackson County Indiana is rich in railroad history. A number of rail lines crisscross through the area. Small rural communities grew in population and industry and welcomed those looking for work and those buying land and settling in the area.

During the latter 1840’s, the Jeffersonville and Indianapolis railroad was built going north-south through Seymour, then known as Mule’s Crossing., The land was owned by the Shields family. In 1852, an east-west railroad company was interested in building in Seymour as well. The Ohio-Mississippi Railroad Co. was offered a lucrative deal to build on the Shields property by Meedy Shields. He even offered to build a 3-mile fill through marshlands, property for a depot, roundhouse and repair shop and offered to name the town for the O&M engineer, Charles Seymour. In 1852, Seymour became a junction of two major rail lines. Capt. Meedy Shields became a state senator and secured the passage of a safety bill requiring all trains to stop at all railroad intersections. Because of him, the two railroads were forced to stop in Seymour, which was great for business and for the small town. Seymour was incorporated in 1864 with a population of 1,553.

The exploits of the James-Younger Game and Butch Cassidy and the Sundance Kid are legendary, but few know that armed train robbing was pioneered by a lesser-known gang from Jackson County. Raised in the Rockford area, the Reno brothers were said to dislike school and their strict upbringing. Burglary, horse theft, arson and a blaze of crime throughout the Midwest were only the beginning.

On October 6, 1866, John and Simeon Reno and Frank Sparks boarded an O&M train in Seymour as it headed out of town forcing the messenger to open the safe. They stole $12,000 to $18,000 and pushed another safe, rumored to have $30,000 inside, from the train. That safe, providing too heavy, was abandoned.

The Renos were captured by the Pinkerton National Detective Agency and jailed in New Albany, IN (some 55 miles of Seymour). Frank Reno and Charlie Anderson has been jailed in Canada for crimes committed and were extradited to New Albany. 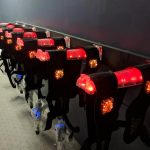 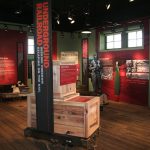